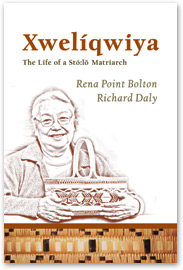 Xwelíqwiya is the life story of Rena Point Bolton, a Stó:lō matriarch, artist, and craftswoman. Proceeding by way of conversational vignettes, the beginning chapters recount Point Bolton's early years on the banks of the Fraser River during the Depression. While at the time the Stó:lō, or Xwélmexw, as they call themselves today, kept secret their ways of life to avoid persecution by the Canadian government, Point Bolton’s mother and grandmother schooled her in the skills needed for living from what the land provides, as well as in the craftwork and songs of her people, passing on a duty to keep these practices alive. Point Bolton was taken to a residential school for the next several years and would go on to marry and raise ten children, but her childhood training ultimately set the stage for her roles as a teacher and activist. Recognizing the urgent need to forge a sense of cultural continuity among the younger members of her community, Point Bolton visited many communities and worked with federal, provincial, and First Nations politicians to help break the intercultural silence by reviving knowledge of and interest in Aboriginal art. She did so with the deft and heartfelt use of both her voice and her hands.
Over the course of many years, Daly collaborated with Point Bolton to pen her story. At once a memoir, an oral history, and an “insider” ethnography directed and presented by the subject herself, the result attests both to Daly’s relationship with the family and to Point Bolton’s desire to inspire others to use traditional knowledge and experience to build their own distinctive, successful, and creative lives.

Rena Point Bolton is a Xwélmexw artist and weaver who lives in northern British Columbia.

Richard Daly is a social anthropologist, translator, editor, and Aboriginal rights consultant. Originally from a fishing and forestry community on the Pacific Coast, Daly now resides in Norway near Oslo.