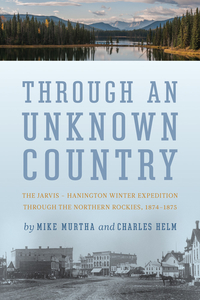 In the winter of 1874–75, Edward Worrell Jarvis (1846 –1894) and Charles Francis Hanington (1848–1930) took part in an expedition on behalf of the Canadian Pacific Survey from Quesnel, British Columbia, to Winnipeg, Manitoba. It led them over the northern Rocky Mountains through what would come to be known as Jarvis Pass (Kakwa Provincial Park, British Columbia) and eventually onto the Canadian plains. The trip took them 116 days and covered over 3,000 kilometres, of which almost 1,500 was travelled on snowshoes.

Through an Unknown Country brings together the day-to-day reports of Jarvis and the more entertaining narrative of the epic journey by Hanington into a single volume for the first time. Recounting harrowing treks through deep mountains, densely forested valleys, open foothills and wide prairie, this highly readable adventure story can be read alongside the better-known journals of Alexander Mackenzie, Simon Fraser, David Thompson and Paul Kane.

Mike Murtha has worked for both Parks Canada and BC Parks and was the planner for Banff National Park until his retirement in 2012.

Charles Helm is a medical doctor originally from South Africa and is the author of four books.