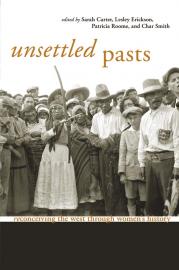 The traditional mythology of the West is dominated by male images: the fur trader, the Mountie, the missionary, the miner, the cowboy, the politician, the Chief. Unsettled Pasts: Reconceiving the West claims to re-examine the West through women's eyes. It draws together contributions from researchers, scholars, and academic and community activists, and seeks to create dialogue across geographic, cultural, and disciplinary boundaries. Ranging from scholarly essays to poetry, these pieces offer the reader a sample of some of today's most innovative approaches to western Canadian women's history; several of the themes that run throughout the volume have only recently been critically addressed. By rewriting the West from the perspective of women, the contributors complicate traditional narratives of the region's past by contesting historical generalizations, thus transcending the myths and "frontier" legacies that emerged out of imperial and masculine priorities and perspectives.