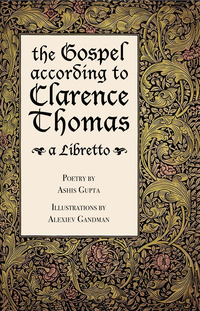 Crafted as a long poem, a libretto for stage presentations, “The Gospel according to Clarence Thomas” is less about Clarence Thomas than it is about the devastating reign of the Bush administration. The central idea of the book is: ‘War is an Evil product of Evil/Hypocritical Minds’.

The ‘Chorus of the Homeless’ occupies a central role in the poem, performing a function much like the Chorus in Greek Tragedies, providing a reasonably objective commentary. In a sense, the central story is a tragedy too – George Bush is a tragic figure. And, towards the end, he is conceived as a tragic hero, a Samson-like figure who pulls down the temple over his head to crush the Philistines. (Samson, by the way, was history’s first ‘suicide-bomber’).