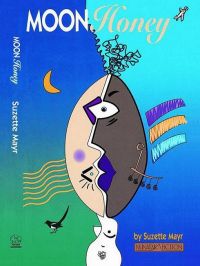 Carmen and Griffin, young and white, are goofy, head-over-heels in love. When Carmen turns into a black woman, Griffin thrills at a love turned exotic. But Carmen's transformation means trouble for Griffin's racist mother, already struggling with a new lover and a husband nicknamed God. The question is, can love be relied on to save the day? Moon Honey is a funny, sexy tale of love affairs and magical transformations.

Suzette Mayr is the author of four novels: Moon Honey, The Wdows, Venemous Hum (Arsenal Pulp Press), and Monoceros (Coach House Books). Her NeWest titles are Moon Honey, which was nominated for the Henry Kreisel Award for Best First Book and the Georges Bugnet award for Best Novel, and The Widows, which was nominated for the Commonwealth Prize for Best Book in the Canada-Caribbean Region. Her latest novel, Monoceros, was the winner of the 2012 ReLit Award and the City of Calgary W.O. Mitchell Award, was longlisted for the 2011 Scotiabank Giller Prize; and was nominated for the Ferro-Grumley Award for LGBT Fiction and the Georges Bugnet Award for Fiction. She currently teaches Creative Writing at the University of Calgary.