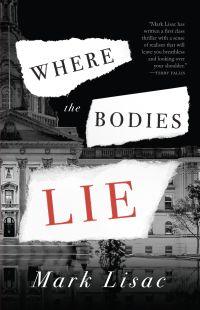 Enter the premier’s old friend Harry Asher—lawyer, former hockey star, self-styled intellectual, and recent divorcé—who is hired to dig into the incident. And it isn’t long before Asher’s investigation threatens to expose a chain of corruption that implicates many of the province’s most powerful citizens—including the province’s legendary now-senile ex-premier—as well as its most cherished founding myths.

In Where the Bodies Lie, Mark Lisac (author of Alberta Politics Uncovered and The Klein Revolution) draws upon his decades of experience as a reporter at Alberta’s provincial legislature to craft an absorbing debut novel—part political thriller, part fable—that opens up timeless themes of friendship, love, the inescapability of grief, the weight of history, and the nature of truth.

Mark Lisac, originally from Hamilton, worked as a journalist in Saskatchewan for five years. He began writing about Alberta politics in 1979 as a reporter for The Canadian Press and then as a columnist for The Edmonton Journal. From 2005 to 2013, he was publisher and editor of the independent political newsletter Insight into Government. He published The Klein Revolution in 1995 and Alberta Politics Uncovered in 2004. He also contributed a chapter to Alberta Premiers of the Twentieth Century and edited Lois Hole Speaks.