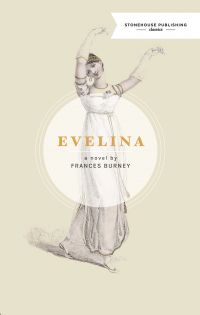 The first novel by the prolific 18th century writer, Evelina is a lighthearted epistolary novel chronicling a young lady's rise in Regency England society. Evelina, having been raised in the country and sheltered from the evils of London, is suddenly thrust into the height of upper class society and introduced to her ridiculous and self-important grandmother. What follows is an entertaining tale of love, friendship, and growing up, told with the wit and charm that inspired, and was admired by, Jane Austen.

Daughter of famed Music Historian, Charles Burney, Frances Burney became a literary sensation soon after she released her first book, Evelina, in 1778. Although Evelina was first published anonymously, Miss Burney’s identity as the author was soon discovered, coming as a surprise even to her father. She became second keeper of the robes for Queen Charlotte starting in 1786, and then in 1793, met and married the French émigré, General D’Arblay. Frances chronicled her long life in her Journals and Letters, which have been preserved and reprinted various times (recently, by McGill-Queen’s University Press). Frances Burney’s novels were known and admired by Jane Austen, Napoleon and Edmund Burke alike. Frances Burney was born in Norfolk, England, in 1752 and died in Bath in 1840.