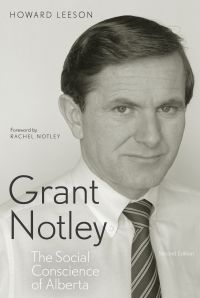 This book is a biography of my dad’s political life. However, it is also a primer for would-be politicians. Its most salient message? Political victory worth having rarely comes easy.
– Rachel Notley, from the Foreword

Grant Notley, leader of Alberta’s New Democratic Party from 1968 to 1984, stood out in Alberta politics. His goals, his personal integrity, his obvious dedication to social change, and his “practical idealism” made him the social conscience of Alberta. He bridged the old and the new; he provided the necessary hard work to ensure the continuation of a social democratic party in Alberta. Albertans felt intuitively that he represented a part of their collective being, and his untimely death in 1984 touched them deeply. Leeson’s new introduction recognizes Grant Notley’s significant contribution to the continuity and health of his party while acknowledging the important work of his daughter, Rachel Notley, who led the Alberta NDP to electoral victory in 2015. Readers of politics, biography, and social history will appreciate this new edition of an important book.

Howard Leeson's biography of Grant Notley is based on his years of association with the NDP. He was Mr. Notley's first executive assistant in 1971. He is Professor Emeritus of Political Science at the University of Regina. He and his wife Ede live on a small farm just outside of Regina.