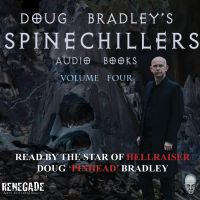 Volume 4 is a feast for crows with such tales as Lost Hearts, The Damned Thing, Poe’s famous poem A Dream Within a Dream, and a man’s descent into madness with only his black cat to keep him company. This ebook contains all stories from Volume Four of the Spinechillers audiobook series as well as Doug Bradley’s special introduction, including:
Lost Hearts (1904) - M.R. James
The Damned Thing (1898) - Ambrose Bierce
The Trial for Murder (1865) - Charles Dickens
John Mortonson's Funeral (1906) - Ambrose Bierce
In The Vault (1925) - H.P. Lovecraft
The Black Cat (1843) - Edgar Allan Poe
A Dream Within a Dream (1827) - Edgar Allan Poe

Read these seven classic horror stories, presented for the first time in association with the best-selling audiobook series.

famous author of classic horror and stories of suspense