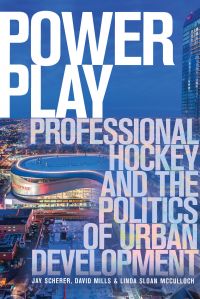 When the Rogers Place arena opened in downtown Edmonton in September 2016, no amount of buzz could drown out the rumours of manipulation, secret deals, and corporate greed undergirding the project. Working with documentary evidence and original interviews, the authors present an absorbing account of the machinations that got the arena and the adjacent Ice District built, with a price tag of more than $600 million. The arena deal, they argue, established a costly public financing precedent that people across North America should watch closely, as many cities consider building sports facilities for professional teams or international competitions. Their analysis brings clarity and nuance to a case shrouded in secrecy and understood by few besides political and business insiders. Power Play tells a dramatic story about clashing priorities where sports, money, and municipal power meet.

Jay Scherer is Professor of Kinesiology, Sport, and Recreation at the University of Alberta.

David Mills is a retired Professor of Canadian history from the University of Alberta.

Linda Sloan McCulloch was elected and served on Edmonton City Council from 2004 to 2013.